Anarchism and the Upcoming American Election (No Weekly Hubris Issues for October or November, 2020)

Weekly Hubris will not be published during October or November, 2020. My draft essay submitted for publication in October is about anarchism, consistent with the issue’s original theme, the upcoming U.S. election. I have pasted it below. Please subscribe to Weekly Hubris here.

Anarchism and the Upcoming American Election

A few people have influenced my life and how I live. These include, for example, American writers Henry David Thoreau, Wendell Berry, Noam Chomsky, Howard Zinn, and Edward Abbey. Each of these authors is also a philosopher, which indicates they are deep thinkers who encourage others to think deeply. In addition, most of them encourage lifestyles rooted in love for the living planet. Importantly, each of these writers is an anarchist.

Anarchism, as indicated by the word’s etymology, is a system without rulers. As a result, it depends upon consensus among members of a relatively small tribe. I suspect the ability of anarchism to work effectively was outstripped a few thousand years ago, at least 300,000 years after our species came into existence, when civilizations arose and it therefore became possible to grow, store, and distribute grains at large scale. In contrast to anarchy, chaos is a “system” without rules. The distinction between anarchy and chaos is important, and poorly understood by many people.

Influenced by the American authors listed above, and other writers and scholars, it has been a few decades since I voted. I have not registered to vote in the last four states I have called home.

I tend to agree with American stand-up comedian George Carlin, who had the following to say about voting for politicians: “Two reasons I don’t vote: first of all, it’s meaningless. This country was bought and sold and paid for a long time ago … And secondly, I don’t vote ’cause I believe if you vote, you have no right to complain. People like to twist that around … But where’s the logic in that? If you vote, and you elect dishonest, incompetent people, and they get into office and screw everything up, well you are responsible for what they have done, YOU caused the problem, you voted them in, you have no right to complain. I on the other hand, who did not vote, WHO DID NOT VOTE, am in no way responsible for what these people have done, and have every RIGHT to complain as loud as I want, about the mess YOU created, that I had nothing to do with.”

Carlin demonstrated his anarchistic tendencies throughout his career. He followed several well-known Americans in this pursuit, including the authors I mentioned above.

Writing in the nineteenth century, Thoreau idealized an agricultural society that was close to nature. Thoreau was a staunch defender of agrarian anarchy, and his writing focused closely on the individual member of society: “That government is best which governs not at all; and when men are prepared for it, that will be the kind of government which they will have.” To my knowledge, no state governments believe we have yet reached that point.

Cactus Ed was a guiding light for anarchism and his writings influenced the path of my life. Abbey received his M.A. in philosophy from the University of New Mexico in 1956, with a thesis titled, “Anarchism and the Morality of Violence.” Abbey established himself as “a voice crying in the wilderness, for the wilderness,” according to a review of his 1968 break-out book Desert Solitaire in the >New York Times. Consider the following few lines from among Abbey’s written works:

(1) Anarchism is not a romantic fable but the hardheaded realization, based on five thousand years of experience, that we cannot entrust the management of our lives to kings, priests, politicians, generals, and county commissioners.

(3) A patriot must be ready to defend his country against his government.

The first of Abbey’s books that I read was the sequel to his break-out book, Desert Solitaire (1968). The lesser-known book The Journey Home (1977) was foisted upon me by a college roommate. I read it quickly and soon turned to Abbey’s other books, consuming them rather than studying for my courses in forestry.

Abbey’s legacy includes a mix of fiction and nonfiction. As he admitted, his books in the two genres were barely distinguishable from one another with respect to genre. His friends and his adventurous life informed his works of fiction. Most of his books were geographically focused in the southwestern United States where Abbey lived most of his life. As it turns out, I spent much of my adult life in the same geographic area.

I learned to camp and backpack as the middle of three children born to teachers who were inclined to spend time outdoors. I grew up in a small village in northern Idaho surrounded by wildness. Not wilderness, mind you: wildness. Most of the area around Weippe, Idaho was forested with large trees at the time and Idaho lacked designated Wilderness Areas. The behemoths are gone now, replaced by forests of second-growth matchsticks. The environmental warnings of my parents echo in my brain.

My free-range childhood was misspent during the American cultural revolution, coincident with the period during which Abbey was writing Desert Solitaire, The Journey Home, and his other books. By the time I discovered Abbey’s writings, they were familiar in part because the time he was writing coincided with my experiences, and also because we both called ourselves westerners. As with my parents, Abbey was sounding the environmental claxon. Abbey was a lot funnier about it than my parents. He found humor in the tragedy that my parents largely left out of their descriptions of the horrors to come.

After reading each of Abbey’s books that I could get my hands on, I began reading the authors to whom he referred in his written works: Henry David Thoreau (who I had discovered in high school), Aldo Leopold (who I had discovered coincidently with finding Abbey’s writings), Wallace Stegner, A.B. Guthrie, Jr., Gary Snyder, and Lao Tzu.

I still regularly read passages from Lao Tzu’s Tao Te Ching. I have three translations on my bookshelf because Abbey recommended the book. Increasingly, I came to know the western United States not only through direct experiences, but also via literature. The writings of others served as a lens for my direct experiences. For example, I learned about Stegner’s “stickers” and “boomers” (those who stay vs. those who exploit, respectively, with a focus on the West). It was through these writings that I came to appreciate not only the big woods of my early years, but also the sweeping plains and the brittle desert that upon first inspection seem desolate and harsh, respectively.

In one of Abbey’s books, he describes a hike to the confluence of the Green and Colorado Rivers in southern Utah. His young daughter joined him for the hike. Abbey’s description was so compelling that when I reread it more than two decades ago I immediately began planning a trip by packing my 1983 Ford F-150 pickup truck. I subsequently set out on a camping adventure. I hiked to the confluence overlook and peered down several hundred feet. The waters of the reddish Colorado River and the greenish Green River mixed slowly, requiring nearly a half-mile before the waters became indistinguishable.

My lifelong affection for the West — uppercase W intended to signify geography and attitude — never faded. I am most comfortable in this region. That I no longer call it home is consistent with my Buddhist-inspired sense of impermanence regarding all structures and experiences.

I continue to write and speak for many of the same reasons Abbey did. “I write to entertain my friends and to exasperate our enemies,” and I am fortunate that Abbey and I have shared friends and also shared enemies. “I write to make a difference,” if only to a few people. I write “to honor life and to praise the divine beauty of the natural world.” These goals are inherently consistent: Honoring life and praising the beauty of the natural world are part and parcel of my teachings, which of course are intended to make a difference. I seriously doubt national-level elections in the country of my birth make a difference of any significance to the masses.

Long ago, in part because of the authors I have cited above, I recognized that the divided states of America had become a fascist state. As a result, and in light of the natural beauty in which we are fortunate to be embedded, voting has become a waste of my time. This conclusion aside, I do not give advice about voting. That I am not a member of the voting populace does not mean I am sufficiently knowledgeable to ask you to forgo this democratic act, regardless how meaningless I consider it to be.

The 57-acre homestead I occupied in western Belize has been re-listed for sale (click here for listing). My partner, who owns the property, must spend time with her family in Florida. She is selling the homestead at a monetary loss to be near her ill father. 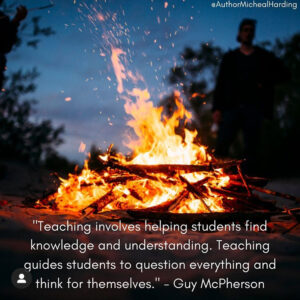 Published August, 2020: Another Voice Crying in the Wilderness: My Homage to Edward Abbey, available at a reasonable price in three formats:

Signed, inscribed copies can be purchased here for $18 (includes postage and handling within the United States). These copies will be signed by the author and inscribed to whom you wish (e.g., “To Bill and Jane …”).

Mugs, tote bags, iPhone cases, tee shirts, and other pragmatic goods affiliated with NBL are available on Redbubble). I do not earn money from these items. Indeed, they have returned far less money than it cost to create and distribute them. I list them at the bottom of posts in this space in support of my artistically inclined partner, who created them.