Professor Emeritus Guy McPherson received the Jazz for Peace Honorary Ambassador Award during a ceremony held 10 October 2020. McPherson and friends from the states of Connecticut, Florida, New York, and Vermont joined Rick DellaRatta and his band for a night of jazz and the presentation of the award at Caffé Lena in Saratoga Springs, New York. Video and pictures from the evening’s activities will be posted soon in this space. 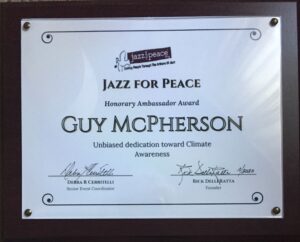